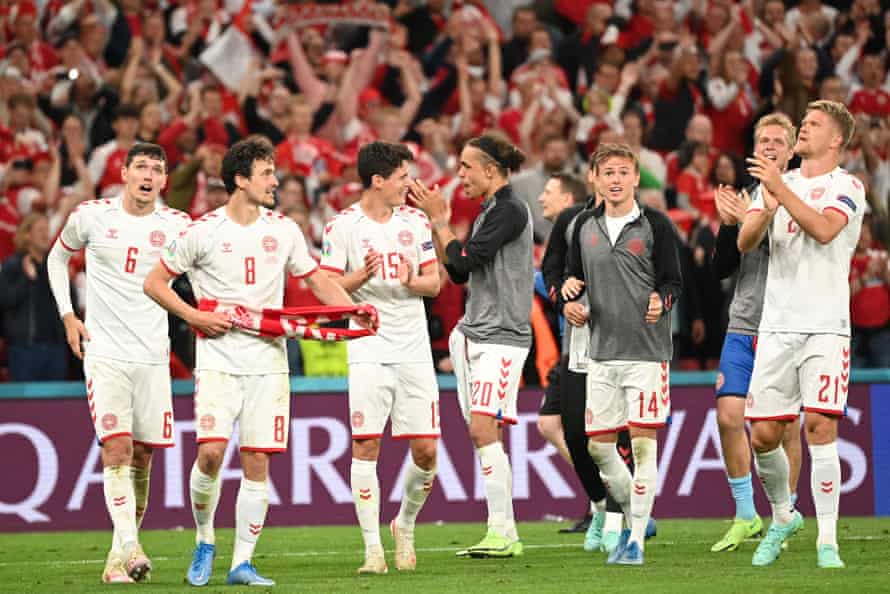 The Fiver always had Gareth Southgate down as a sensitive indie type. A hint of the Smiths, maybe a touch of Echo & the Bunnymen, a decent helping of Belle & Sebastian. Definitely more Blur than Oasis and maybe a bit of Reef when he wants to really let his hair down. He’d tell you that Gene were massively underrated, that Travis’s first album was actually good, that no, Monaco weren’t a one-hit wonder, have you heard Sweet Lips?!

In fact, it turns out our Gareth is something of a Rage Against The Machine fan and that, not to put too fine a point on it, he won’t do what you tell him. His chosen whites wearing the badge initially seemed likely to be very similar to the ones he named for the games against Croatia and Scotland.

But now there will have to be some ch-ch-ch-changes after all, because Chelsea chums Mason Mount and Ben Chilwell got too close and personal with Scotland’s Billy Gilmour after the match on Friday. Gilmour has since tested positive for coronavirus and the Chelsea pair now have to isolate up to and including Monday. “We had worked with the players this morning on the training pitch so then of course we find out when we finish that this is the situation,” Southgate shrugged. “I can’t say it isn’t disruptive.”

The Euros blog is here, while Scott Murray will be on hand for hot MBM coverage of Czech Republic 1-1 England at 8pm BST, when Paul Doyle will be all over Croatia 2-0 Scotland.

QUOTE OF THE DAY

“We’ve been through so much in the time we’ve been together. We all agreed that this was not the last chapter in this story. We must be allowed to enjoy the victory tonight and the feeling of moving on, after everything we have been through as a team. There was no doubt that this victory was also for [him]” – Denmark midfielder Christian Norgaard dedicates their spectacular 4-1 win over Russia to Christian Eriksen. Next up in the last 16: new bad guys, er, Wales.

“I am pleased that, once again, Uefa has got all the big decisions right for EN 2020. It has players flying unnecessarily all over Europe to keep the carbon pumping out at a decent level. It is giving Covid a fair-play handshake and making sure it gets a chance to spread all over the shop. It even showed top-class Respect™ by filming a young man fighting for his life and then forcing his friends to play a game of football. Most importantly though, it’s so good to see it showing a message of inclusivity by stopping the divisive plan of allowing a rainbow to be lit up in Munich. A move that would have implied that LGBTQ+ people should have the same rights as everyone else and should be free from persecution. Well done Uefa, well done” – Steve Hallmark.

“So, the Danes stood in the middle of the pitch watching a live score app refresh on a phone to find out the result of the Finland match? Have they never heard of a transistor radio? That’s the traditional way to follow another match, not this newfangled techno-stuff. Tradition!” – Mike Wilner.

“I get a little dazed and confused when I see the name of the Wales manager Robert Page as I think they’ve mixed up the names of two bandmates. Is he from Bron-Yr-Aur?” – James Marriott.

Send your letters to the.boss@theguardian.com. And you can always tweet The Fiver via @guardian_sport. Today’s winner of our prizeless letter o’ the day is … Steve Hallmark.

As referred to above, Uefa has declined a request by the mayor of Munich to light the Allianz Arena in rainbow colours for Germany’s match against Hungary, where prime minister Viktor Orbán recently passed legislation banning LGBT content in school or on kids TV. Just do it anyway.

Italy PM Mario Draghi wants the EN 2020 final to be held in Rome rather than London because it would be good for him in the polls of Britain’s rising Covid rates.

Denmark fans have been told they can travel to Amsterdam to watch the last-16 tie which Wales supporters are banned from. “I think Uefa should have looked at these venues and made sure there was a level playing field,” growled FSA Cymru chief suit Vince Alm.

Spain hope to make Dutch TV pundit Rafael van der Vaart eat his words about their “horrible” performances so far. “Van der Vaart wanted his moment of glory and he is having it,” sniffed Koke. “I saw him in the World Cup final, and here at our training base we have a picture of Iniesta’s goal against the Netherlands with him next to him. You have to respect people’s opinions but we’ll remember these words.”

And Sweden’s Robin Quaison has credited three hairdressers who visited the team’s training camp in Gothenburg for helping get the better of Slovakia. “Without the barbers, we would have drawn. With them, we won,” he honked. “It’s really important, it gives great self-confidence to get your hair fixed and you play better.”

Manchester City have made an opening bid for Harry Kane which would guarantee Tottenham at least – and it’s not a typo – £100m for the England striker. Spurs are, nonetheless, determined to resist it.

Crystal Palace have held positive talks with Lucien Favre over potentially replacing Mr Roy, but could face competition from Everton to appoint the 63-year-old as manager.

And Lyon promised to make women’s football sit up and notice them again – they’re doing exactly that.

England must stop playing for tomorrow and catch fire. By Barney Ronay.

Patrik Schick: the Czech star who was told he would never make it. Lukas Vrablik has more.

Oh, and if it’s your thing … you can follow Big Website on Big Social FaceSpace. And INSTACHAT, TOO!